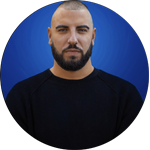 Gerry is the CEO and co-founder of PlaySide and has spent over 15 years in the games industry. Gerry is a young, passionate leader who takes a creative visionary approach to leading his team. Gerry started his professional career at EA Games as a tester, and over the next 4 years made his way to lead designer of the Melbourne studio. Gerry worked on games such as Dead Space, The Godfather 2 and Dante’s Inferno.

Gerry’s strong entrepreneurial drive saw him leave EA and co-found PlaySide in 2011. For the past 8 years Gerry has been responsible for leading and growing PlaySide to a team of 130+ staff, with his creative drive a key focus for growth. Since PlaySide’s inception Gerry has led the team responsible for creating, designing and producing most of PlaySide’s largest titles, such as Age of Darkness: Final Stand, Animal Warfare, Battle Simulator: Warfare, Catch The Ark, Safe Zone and many more, with PlaySide’s revenue growing to $10.88m during FY21.

Gerry also led the team that designed one of the most downloaded augmented reality games ever produced, AR Dragon, which was one of the first commercial AR games to launch to market. Gerry graduated from RMIT with a Bachelor of Arts (Digital Arts and Games) in 2007. The Board considers that Mr Sakkas is not an independent Director.